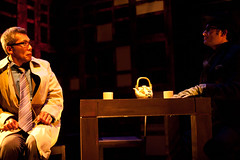 The Cultch presents Pi Theatre and Rumble Productions hit production of after the quake, directed by Craig Hall and Richard Wolfe. In 1995, a disastrous earthquake hit Kobe, Japan and the Tokyo subway was hit by deadly poison gas attacks. after the quake is based on bestselling author Haruki Murakami’s stories about life in the wake of disaster, and was adapted for the stage by Frank Galati. Click here for more information about Murakami.

after the quake takes its audience on a journey where magic and realism collide, in an exploration of disrupted reality. Junpei is a timid writer who enchants Sayoko, the love of his life, by conjuring up stories to soothe the anguish of her young daughter Sala, a girl who is having nightmares of the Earthquake Man. A talking bear makes the very best honey pies, and Katagiri, a bank loans officer, struggles to distinguish between what is real and what is not when six-foot Frog asks for help to fight off giant Worm for the future of Tokyo. Together, these stories explore the emotional aftershocks of disaster, and offer a message of hope and healing. The Cultch 1895 Venables Street, Vancouver, BC Box office: (604) 251-1363.

Pi Theatre would like to thank The Leon and Thea Koerner Foundation, Word on the Street Festival, National Nikkei Museum & Heritage Centre, Geist Magazine, The Powell Street Festival, The Bulletin, the Vancouver Japanese Language School and Japanese Hall, and the National Association of Japanese Canadians, for their support of this production.