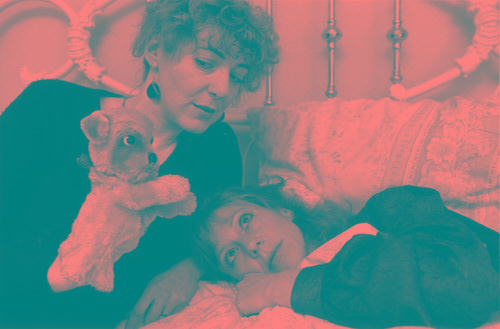 a letter from the playwright...

To Whom It May Concern

This is simply to re-emphasis how impressed and excited I was by the Pink Ink  production of my play AUNT DAN AND LEMON directed by Robert Garfat.  The commitment, intelligence, and intense feeling that were lavished on my text made me feel at once proud and humble. The production’s combination of detailed and careful analysis, on the one hand, and forcefully direct presentation on the other hand, seemed to seize the audience by the throat, and I only wished, when the piece was over, that it could be seen by more people! What a great company!

Aunt Dan and Lemon is a poisonously subtle play about the way ideas polarize themselves as if overnight – about how the prevailing winds of correct opinion may sweep you up without your even noticing.
A young English woman (Leonore, but nicknamed Lemon) sits in an armchair, pallid and thin from her staple diet of juices.  She spends her time alone thinking over what she’s read about the Nazi death camps, about her childhood and its singularly formative influence – her Aunt Dan.
…
Aunt Dan, an articulate and even charming woman, is a hawk (the action takes place during the Vietnamese War).  An aggressive proponent of the war and an obsessive adorer of Henry Kissinger, she argues her points with a mixture of the pragmatic, the informed and the fearlessly candid.  Everything she says sounds so enlightened, and yet – as is felt by Lemon’s gentle and passive mother – so fundamentally wrong somehow.

A fragile truth is being sifted into oblivion at the same time that we are tauntingly asked for some viable definition of com-passion and an honest denial of the unthinkable.  For example:  How much cruelty do we secretly enjoy?  And, when does ex-termination become simple expediency?

Very much a test of an audience’s conscience, the play acquires a merciless knifelike smoothness under the fine direction of  Robert Garfat. …

The ensemble is first-rate...  But the two striking performances are Jennifer Griffin’s London call girl, Mindy, who is as raw and natural as life, and Annabel Kershaw’s Lemon, who in that final blasphemous monologue is spellbinding.  She becomes one of those people who you know are wrong and who can still talk rings around you.
___