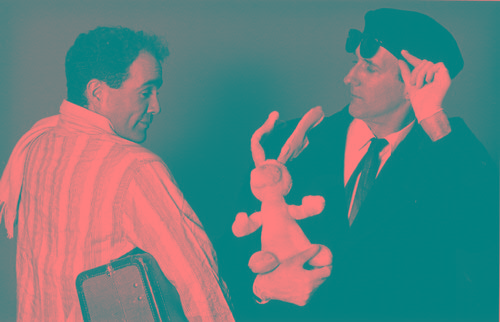 THE BALTIMORE WALTZ By Colin Smith

Even if you fight with your boyfriend in Paris, you still get to go up the Eiffel tower, right?  Most trips have their rough spots, but they shouldn’t blind you to the penultimate value of travel.  That’s what this production of The Baltimore Waltz is like – bumpy, but worth the ride.

The Baltimore Waltz is, as it happens, about a European tour taken by a woman named Anna and her brother, Carl.  Anna is dying of ATD (Acquired Toilet Disease), a new scourge that is striking down elementary schoolteachers in the prime of life.  She got it from the toilet seat in her classroom.  (“You have no idea.  Five-year-olds can be deadly.”)

The script itself is a huge treat.  Glib as the idea of ATD may at first appear, it allows playwright Paula Vogel to rail at the painful absurdities of AIDS while allowing the audience the release of laughing at them.  It also allows Vogel to score some crucial political points.  As Anna goes through the famous “stages of dying,” she reaches the third stage – bargaining – and wonders:  “Do you think if I let Elisabeth Kübler-Ross sit on my face, I’ll get well?”  Promiscuous sexuality, so much maligned these days, is celebrated.  (Anna discovers a seventh stage of dying:  lust.)  Both the lethargy of the medical establishment and the brutal exploitation of quack cures are parodied.  (Anna’s main reason for going to Europe is to visit a urologist, a man who wants her to drink her pee.)

If this level of the script sounds vulgar, don’t be deceived:  there is also real thematic and structural sophistication in The Baltimore Waltz.  Through alienating devices such as simultaneous translation, the audience is challenged to examine language, especially medical jargon.  Issues of sensuality are playfully addressed.  (As Anna humps her brains out with the French waiter, Carl describes the glories of the Louvre.)  And gay male sexuality is represented by a stuffed rabbit, precious to him since childhood.  This is not only a declaration of the innocence of homosexuality:  Carl is also pressured to trade his rabbit to obtain a questionable cure for his sister.  (So many of us find justification for bargaining away our freedom and pride, as though that were the price of survival.)

Unfortunately, Pink Ink’s production of The Baltimore Waltz is not always as successful as the script.  Of the three performances, only Patti Allan’s Anna is consistently successful.  Allan manages to embrace the insanity of the character and her situation, yet make it all emotionally credible.  (I believed her, for instance, when she burst into tears over a French lunch and wailed:  “I’ve wasted 30 years of my life on convenience foods!”)  Allan’s performance is giddy, often physically eccentric, but these qualities extend from a solid emotional core.
…
This show should get faster and faster, whereas Schultze’s production is always far too slow and deliberate.  And there isn’t nearly enough real sensuality in the show – subtle touches, covert glances.

Still, the staging is often inventive, and the stylistic difficulties I have with this production by no means obscure the extraordinary script.  There may be a few problems getting to the top of the Eiffel Tower, but once you’re there you’ll love the view.