The Baroness and the Pig 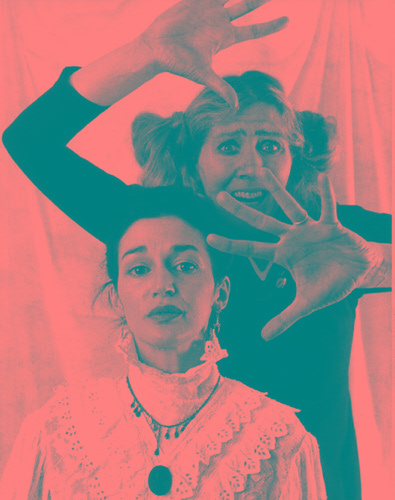 What happens when a member of the 1890s French Aristocracy takes in a girl who was brought up by pigs... and tries to turn her into a housemaid ?

Find out in Michael Mackenzie's The Baroness and the Pig.
___

ACTRESSES PIG OUT IN BARONESS

Talk about making a silk purse out of a sow’s ear.

That’s what Vancouver actresses Diane Brown and Tabitha St. Germain do with the delightful black comedy, The Baroness and the Pig.

The Pink Ink production, which opened at the Firehall Thursday night, is largely based on a one-joke plot.

It’s the story of what happens when a member of the 1890s French aristocracy takes in a girl who’s been brought up by pigs and tries to turn her into a housemaid.

Brown is totally convincing as Emily, the sty-raised girl.

She display a charming, childlike innocence, blinking her eyes, grunting and wrinkling up her nose but there’s an undercurrent of danger when her animal instincts take over.

Most of the laughs come from poor Emily’s attempts to adapt, and Brown’s physical humor is hilarious.  She burrows headfirst into the laundry hamper to pluck sheets out with her teeth and struggles to fold them, using her hands like a pig’s trotters.

Scenes where the Baroness teaches Emily to answer the door and the girl’s finger-puppet, nonsense acting of a scene from Julius Caesar are a treat.

Unfortunately, a scene in Act 2 showing us that the Baron’s not above making nighttime visit to the servants’ quarters, is played too delicately for the play’s climax to work.

But the moral is clear:  no matter how poor a person’s upbringing, an honest friend can be more valuable than the most well-bred person.

It’s at the Firehall until Dec. 6.