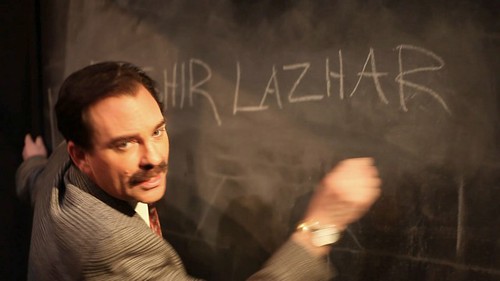 Pi Theatre kicked off its 2008-2009 season with the Western Canadian premiere of the English translation of Evelyne de la Chenelière's Bashir Lazhar.

Bashir Lazhar is a substitute teacher from Algeria who must bring his grade six class through a trauma that mirrors his own. This celebration of courage is told with humour and conviction in a new translation by Morwyn Brebner, who brought us The Optimists and Little Mercy's First Murder.

This one-man show is written with great sensitivity by Evelyne de la Chenelière, considered one of Québec’s pre-eminent playwrights. Bashir has left behind his wife and three children and has come to Montréal to prepare for their new life in Canada. His story explores the practical and emotional nuances of living in a multi-cultural society, and raises questions about the relationship between teacher and student.

Bashir Lazhar is a human portrait that touches on the challenges that many new Canadians experience while trying to find their way in a new country, and those we all face as we make our way in a sometimes-difficult world. It is a celebration of survival through love.

Tickets are FREE to the first 20 Pi members at the door for the first week of each of our shows this season! Become a Member.