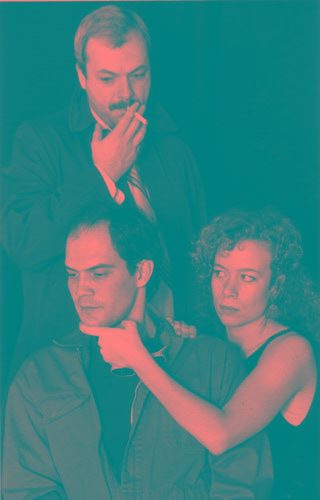 PUT THE PLOT TOGETHER YOURSELF, WELL, SORT OF
By Max Wyman
Theatre Critic

“Warning,” says the pro-gram.  “Live welding.  Please do not look at the flame.” With a set-up like that, any show that’ s less than riveting is going to be in big trouble.

The new Pink Ink Theatre production of The Cezanne Syndrome manages to hold you for its non-stop 90 minutes – though it’s up to you to well the fragments of story into coherent form.

This co-production with the Vancouver Little Theatre is the English-language premiere of an award-winning play by Quebec writer Normand Canac-Marquis.

The flame of the acetylene torch is the first thing you see after the lights go down.  Then, “Is it over now?” a voice asks.

What the voice wants to be over is the anguish of guilt that besets the central char-acter, Gilbert, as, sitting at his workbench, welding his engine-parts, he goes over the over the details leading up to a tragic road accident.

The story is presented to us in remembered, sometimes contradictory fragments (Gilbert, says the author, is experiencing “the martyrdom of a hallucinatory paranoia from sticking too closely to reality,” whatever that means).

Robert Garfat’s direction is taut and strongly visual; Rebekah Johnson’s set is wonderfully redolent of the claustrophobic workshop, and her light-plot helps it all cohere.

Stephen Bland, as the convincingly obsessive and self-lacerating Gilbert, and Sharon Heath (a touch over-emphatic in places) as Her, create an unnervingly plausible relationship that is disintegrating ungracefully.  Tim Healy is a smoothly unflappable detective.

Cezanne doesn’t impinge much except in a quote that may well be the key to the evening – what matters is not so much the object observed as the quality of the observing.

Too bad there’s not more to think about than the obsessive re-examinations of this undeniably riveting psycho-drama.