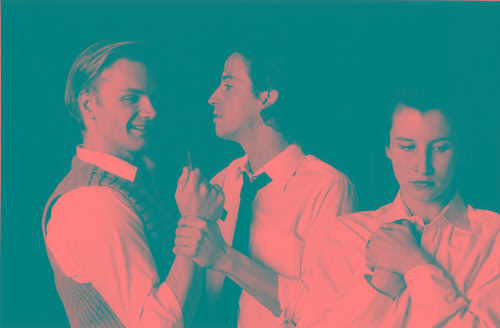 TRUTH AND CONSEQUENCES IN THE USSR

Dear Elena, a recent Soviet play, is what 1950s North American dramatic movies would have felt like if North Americans had had well articulated philosophical concerns.  Think Town Without Pity with an overlay of Dostoevsky.

Like many serious American films from the ’50s, there’s an earnest exposure of evil in Dear Elena.  Stylistically, the play, like those movies, is on the melodramatic edge of realism, yet its gritty urgency makes it feel almost like a documentary.  Moral disintegration, in many of those movies and in this play, is represented by a group of disaffected youths, and those youths take, as a hostage, a representative of the old moral order.  In Dear Elena, the youths are four students, and their hostage is their teacher, Elena Sergeevna.
They arrive at Elena’s apartment, bearing birthday gifts.  Their spinster teacher is moved to tears, but her tears are barely dry before the stench of the students’ plot begins to fill the room.  The students want Elena to give them the key to the safe where their exam papers are being kept.  None of them has done well on their mathematics exams, and their futures in the arts may be ruined as a result.

The students’ leader, Volodya, is as handsome and as pure-looking as a young drake, yet he has machinery inside where his heart and his brain should be.  He is willing to commit rape to break Elena Sergeevna, and he terrorizes her out of “a purely sporting interest.”  Complete rejection of moral and social codes has made him a sociopath.
Part of the complexity of this play is that Elena Sergeevna herself is compromised.  She is a moral woman, but she has applied her morality to an indefensibly corrupt system.

Del Surjik’s set eloquently makes a faded Communist poster the background for Elena’s life.  Under Sandhano Schultze’s direction, an odd convention of opening and closing doors to indicate passage into another room (while merely turning around and remaining in the same space) works well most of the time.  Schultze and Pink Ink must also be complimented for bringing us yet another credible production of an intelligent and passionate play we wouldn’t have seen elsewhere.

Lest anyone should think this play is not relevant to North America today, consider Volodya’s credo:  “My judge is not morality, but expediency.”