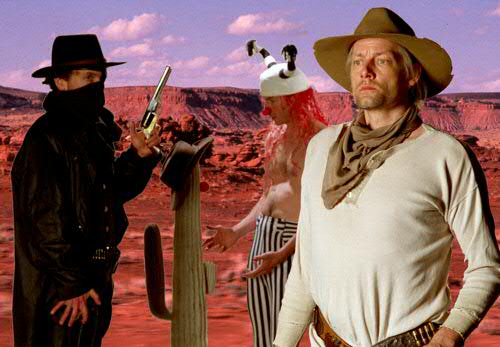 a review from our archives…
COWBOY SPINS A COMIC YARN

The Lonely Cowboy
By Eric Goulem.
Directed by Del Surjik.
A Pi Theatre production.
At Performance Works until April 21

This is Pi Theatre’s first comedy in years, and the company was clearly ready for the change: The Lonely Cowboy satisfies – no, delights – on every level. But don’t take my word for it; go see for yourself.

Eric Goulem’s wildly original script features a garrulous cowboy spinning yarns about his friends and enemies in the Wild West. In a rich cowboy idiom saturated with irony, he tells us of his childhood in his hometown, Acquiesce, where his father branched out from building coffins to designing coffin-shaped furniture, and his witchdoctor mother brewed “purifying bath oils that made you piss, shit, and cry all at the same time”.

In what often amounts to a solo performance, Montreal-based actor Chip Chuipka endows The Lonely Cowboy with warmth, wisdom, and a big heap of mischief. Chuipka is a master storyteller and every inch the cowboy, whether he’s miming the “toe-heel, toe-heel, toe-heel” of Buntworth in slingbacks entering a saloon or drawing his pistols. His supporting cast is equally strong. James O’Shea’s Sand Clown, wearing weird Viking horns and armed only with a juggling pin, delivers physical comedy at its best, while Robert Perrault is suitably menacing as the Stranger, the Cowboy’s mysterious adversary.

Every element of the design works beautifully, too. Under Del Surjik’s direction, The Lonely Cowboy is a visual feast, from David Roberts’ wide-open desert set to Tim Matheson’s gorgeous panoramic slides, which form the backdrop. An early moment, with a big round moon projected beside the set’s lonely cactus, is breathtakingly beautiful. Barbara Clayden’s costumes and Noah Drew’s sound design both play cleverly with cowboy clichés without overstating themselves. It’s a credit to Surjik that all these pieces – and his own sumptuous lighting design – fit together into such a seamless whole.

So what does it all mean? “Take yer brain out and throw it away – you don’t need it,” says The Lonely Cowboy at the top of the show, and for a while I was content to just enjoy his associative observations for their humour and their poetry. He describes sleeping in a cemetery and “smelling the affection that comes from each of the planets at the speed of love,” and says of a sunrise, “The sun is yawning and its breath gives colour to the still life.”

But just when I began to think we were all enjoying a wild ride to nowhere, the disparate elements started to be stitched together most deftly, giving the Cowboy’s early disclaimer the lie. You do need your brain to appreciate that beneath this apparent romp is a powerful and artfully concealed message about how courageous and dangerous it is to deviate from a prescribed path – to flee from acquiescence, to live honestly and authentically without deceit, to follow your dream – and how necessary. This level of the play is all the more satisfying for the way it sneaks up on you; Goulem knows how to use the best tricks of postmodernist narrative without showing off.

I won’t give away any of the twists, because you must go and see this show yourself. I loved The Lonely Cowboy. Chances are you will, too.