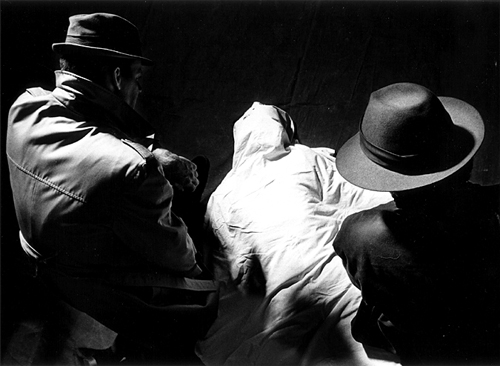 an article from our archives...

Lepage’s Polygraph Plays with Our Notions of Truth and Theatre

Sandhano Schultze, artistic director of Pink Ink Theatre, and Roger Gaudet, artistic director of Théâtre la Seizième, must be feeling like God’s chosen messengers these days.  After all, Robert Lepage (The Dragon’s Trilogy, Vinci, Tectonic Plates) has assumed godlike status both in his native Quebec and in the international theatre community; and Schultze and Gaudet are the chosen two who will bring Lepage’s work to Vancouver.  When they co-direct Polygraph (at the Vancouver East Cultural Centre, through October 31), it will be the first time that a show created by Lepage (who wrote Polygraph with Marie Brassard) has been directed by anyone other than Lepage himself.

Polygraph was inspired by personal tragedy.  In October, 1980, a friend of Lepage’s was murdered, and Lepage himself was briefly suspected of the crime.  The script for Polygraph is not a literal interpretation of those events, however:  it’s an independent creation that involves a film actress (who feels she is being dismembered by technology), the actress’s criminologist boyfriend, and her gay neighbour (who’s into sado-masochistic sex).

The fact that Lepage has a unique creative process is posing some challenges for Schultze and Gaudet.  “It doesn’t matter where you begin,” Lepage has been quoted as saying, “as long as it’s not with a theme, but with a sign, a resource.”  In other words, objects and the emotions they evoke are of prime importance.  In terms of originating a piece of work, one of the reasons for using a physical resource is to avoid intellectualization.  To quote Lepage:  “If someone says that he sees in a fried egg something that has died so that someone else can live, I can’t argue with that.  It’s a feeling.”

Schultze and Gaudet are not originating a text, however, but interpreting it.  “Our first impulse always is to ask, ‘Why?’” says Gaudet.  “We’ve spent a long time on scene 19, for instance.  In the text, that scene is just a stage direction indicating that a camera covered by an umbrella appears over a wall while it’s raining.  You have to ask why.”

The fact that there are two directors involved could easily exacerbate the problem of intellectualization, but Schultze and Gaudet have established an artistic hierarchy – Schultze has the final say – and that stops discussion from being endless.  Schultze says that he regards the script itself as a concrete resource, and adds that staying true to the physicality of the script has been rewarding.  He describes two scenes:  one ends with a kiss, the next begins the same way.  “You’re reminded of that tragic kiss where someone gets poisoned,” he says, “of the kiss Gertrude gives Hamlet.  Or Tristan and Isolde.  And that kiss – all of a sudden, it has this incredible magic about it.  And we weren’t doing anything, really.  We just noticed it.”

Another fascinating idea that Lepage presents is the concept of the filter.  The theory here is that limitations, even arbitrary ones, can act as conduits for creativity.  Think of the rigid syllabic restrictions of haiku, for instance.  Gaudet says that, in approaching this production, Lepage’s demands of the set design have provided a kind of filter.  The main element in the set is a wall that runs from one side of the stage to the other.  “You just can’t get around it, and so we try to understand the importance of the wall; we’ve found so many parallels.”

Gaudet’s point leads to a discussion of theme.  Although Lepage doesn’t start from a theme, he certainly acknowledges that themes emerge from his work.  Schultze says that, for him, the theme “is inherent in the title:  Polygraph.  The polygraph repre-sents the question, ‘What is truth?’  Ultimately, that means, ‘What can we measure, and what can’t we measure?’  All three characters in the show carry a different prin-ciple of truth about with them.  The play is ultimately just there to have these different truths crash with each other and challenge each other.”

In the friendly independence that seems to characterize their working relationship, Gaudet has a different take:  “It’s man against technology for me.  It’s about how you fall victim to it, or take control of it to victimize others, or rebel against it.”

Schultze says that the ultimate challenge for Gaudet and himself will be to “get the audience, from the beginning of the show, into a heightened place,” a place where they can feel free to make their own associations.  Gaudet promises that:  “If you dive into it, you’ll just keep falling.”