Three in the Back,Two in the Head 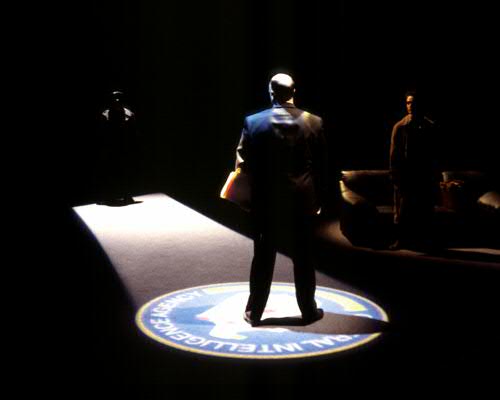 CHILLING SPY TALE WRAPPED IN LAYERS OF DECEIT
Three in the Back, Two in the Head
At the Roundhouse Community Centre until Nov. 18
Reviewed by Jo Ledingham

PI (PINK INK) THEATRE AND RUMBLE Productions invite you to take your mind out of mothballs and take it down to the Roundhouse for an invigorating workout. Chilling in its implications, Three in the Back, Two in the Head is a sophisticated board game between high stake players who tell the truth or lie or agree that lying is part of successful strategy. Slick and dangerous, CIA agent John Doyle tells professor Paul Jackson, “You understood that a lie was passing between us and I, yes, respected you for allowing me to take that position.” Does that mean Doyle is off the hook with Jackson, son of murdered Canadian scientist Donald Jackson? Is the admission of a lie almost as good as the truth?

And is Paul off a different hook if he gets a confession out of Doyle or is he merely smoothing the ragged edges of his own guilt? More questions than answers, Three in the Back, Two in the Head is nevertheless riveting drama deftly directed by Rumble’s artistic producer Norman Armour. First produced in 1994 at Toronto’s Tarragon Theatre, Jason Sherman’s play fits in perfectly with Rumble’s mandate to present risky, multidisciplinary work. co-produced by Pi, whose trademark is visually dazzling productions, Three in the Back, Two in the Head offers a tremendous collaborative opportunity for these two exciting companies.

Sprawling across the huge floor space of the Roundhouse, Three in the Back takes on Pentagon proportions. Set designer Andreas Kahre sparsely furnishes a huge performance space and lighting designer Del Surjik makes the lighting shifts that confidently move us backward and forward through time and space. Noah Drew, sound designer and composer, generates some white knuckles in the audience with the opening roar of a jet aircraft on takeoff then seduces us with tension-filled music that incorporates composer Arvo Pärt’s “Silentium.”

But without actors that dig deep into the material and explore all the nuances, subtleties, half-truths and half-lies, this production wouldn’t fly nearly so high. Actor Gina Stockdale, working without a lot of text or subtext, gives us a grief-stricken, furious widow and mother who charges son Paul with the impossible: “Find out who did this.Bring me their names. Their faces. Their blood for his.”

Alex Ferguson leads us through Paul’s quest with intelligence and, finally, a sense of grief as his character comes to see the world as a “dangerous, volatile environ-ment” where allegorical “tribes” fight over “watering holes” and where the options are to run, fight or embrace the enemy – and embrace really isn’t an option after all.

General Sparrow, Head of Space Defense, is well played by playwright/actor David King. An aging man, soon to be turfed by the Pentagon, Sparrow reveals a betrayal late in the play that raises questions of morality and the greater good. King brings a troubled dignity to this role that makes Sparrow a sympathetic character in spite of his deceit.

Obsessed with a mission to prevent any more men from dying but blind to the needs of his own wife and son, Donald Jackson is an idealist with an ego the size of outer space. Sparrow describes his first encounter with Jackson at a convention: “And he’s walking the walk, I mean his balls are shaking the floorboards.” Alec Willows shakes the floorboards of the Roundhouse, too, with his gravelly rants. When his character goes toe-to-toe with Doyle, the air crackles.

Pivotal character John Doyle is portrayed by Andrew Johnston. A master manipulator, Doyle alternates between slick persuasion and full frontal verbal assault. Big and burly, Johnston is spectacular, doing 180 degrees with the speed of a Howe Street broker at a meltdown. He wheedles, maneuvers and browbeats with such ease it’s terrifying.

Three in the Back, Two in the Head is not a pleasant play – as the title implies. It turns a harsh light on Canada’s self-proclaimed peace keeping role and questions the naivete of scientists who believe they are pursuing “peace through deterrence.” Worse yet, it implies that is an unstoppable human activity.