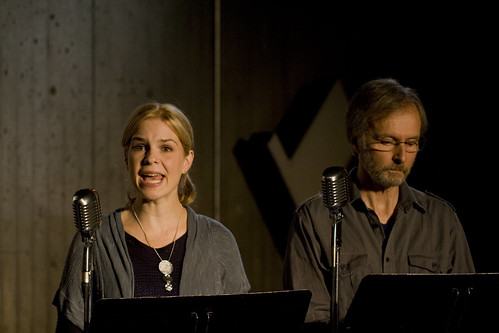 In the spirit of New York, I Love You, and Paris Je T'Aime, sets of short films inspired by the theme of place, Pi Theatre brings you four short plays inspired by our fair city.

The plays were written by five of Vancouver's most exciting playwrights as part of the Vancouver 125celebrations, Visions of Vancouver is inspired by the style of old-time radio broadcasting.

Pi has created podcasts of the live performances and they are now available to stream or download from our website free of charge here.

Stay and chat with our artistic team at the free talkbacks after the shows on the 9th, 11th and 13th.

Pi has asked Dennis Foon, Kevin Loring, Michele Riml, Michael St. John Smith and Adrienne Wong to tell us their Vison of Vancouver, and now it's your turn. Share your Vision of Vancouver with us and enter to win two tickets to opening night!

Dennis Foon
Dennis was co-founder of Vancouver's Green Thumb Theatre and served as Artistic Director for 12 years, where he began writing a body of plays that continue to be produced internationally in numerous languages and for which he has received the British Theatre Award, two Chalmers awards and the Jessie Richardson Career Achievement Award. His play My Acid Trip was a 2009 Jesse Award finalist.
He's won a Gemini, two Writers' guild Awards, three Leos, and the Robert W. Wagner Award for his screenplays, which include the feature Life Above All, Prix Francois Chaais winner at the 2010 Cannes Film Festival and 2011 Academy Award Shortlist for Best Foreign Language Film.

Kevin Loring
A writer and actor based out of Vancouver, Kevin has written for CBC radio and for the stage. He is a recipient of the 2005 Vancouver Arts Award for Emerging Theatre Artist. His play Where the Blood Mixes premiered at the 2008 Luminato Festival in Toronto. Kevin won the Governor General’s Literary Award for Drama in 2009.

Michele Riml
This award-winning Canadian playwright is known for her deft touch for honest dialogue and characters. Her plays have been produced across Canada and in the US including the Globe Theatre, The Grand, the Arts Club Theatre, the Belfry and The Hayworth Theatre (Los Angeles). Other plays include Miss Teen, Under The Influence,RAGE (winner of the 2005 Sydney Risk prize for Outstanding Original Play) and the acclaimed Poster Boys, which premiered at the Arts Club Theatre in 2008. Michele was nominated in 2008 for the prestigious Siminovitch Prize.

Michael St. John Smith
Michael St. John Smith is a writer and actor who has written several plays and screenplays, including most recently, an adaptation of Ivan Coyote's novel Bow Grip for Telefilm and Red Cedar Films. He is delighted to be collaborating on a writing project with his beautiful wife, Michele, for the first time.

Adrienne Wong
Adrienne Wong creates, performs and produces new work for theatre and radio. Recent projects include performing Peter Panties and producing a series of "podplays" - including writing two - for Neworld Theatre. Other highlights include creating three site specific, interactive performances for the three HIVEs, playing scrabble with the province of BC and facilitating an interactive knitting exchange on North by Northwest (CBC Radio One) and perofrming in Made in China, a radio play/documentary (CBC/BBC Wordservice). Adrienne is a graduate of SFU and Artistic Producer of Neworld Theatre.