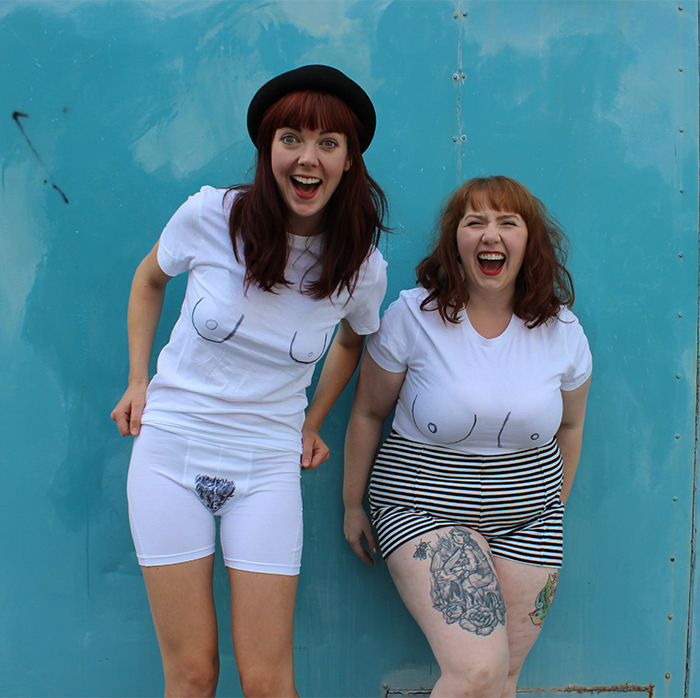 atey and Cheyenne have been hard at work creating the last episode of Lady Parts, VAGINA! This show will end the series with a bang, thanks to the help of the following absolutely hilarious and amazing women.

Directing this episode is Pippa Mackie!
Pippa Mackie is an actor/writer/producer and a graduate of the National Theatre School of Canada. She is a Jessie Richardson Nominee and was the Georgia Straight and Vancouver Sun’s Artist to Watch in 2013.  She has worked with such companies as: Arts Club, Gateway Theatre, Belfry Theatre, Pi Theatre, Rumble Theatre, Delinquent Theatre, Greenthumb theatre and many more. As a writer 6 of Pippa’s plays have been a part of the Pull Festival of which she is the co-Artistic Director. Her play SHE: The Untitled Feminist from the 2017 Pull festival is now a full-length play in development with Speakeasy Theatre and was part of the 2017 rEvolver festival. She is the co-writer/performer of Fringe Festival hits The Progressive Polygamists and Industry: The Food Must Go Out, winner of the Fringe Award for Innovation. Pippa is the co-creator of the Pi theatre cabaret series Lost Words and is the current Associate Producer with Upintheair Theatre.

The two guest artists for VAGINA are Katie Findlay and Kiomi Pyke!
Katie Findlay is an actor and proud East Van gal. You might know her from tv shows like The Killing, The Carrie Diaries, How to Get Away With Murder and Man Seeking Woman. She is stoked to be in Lady Parts: Vagina because 1) she has cohabited with one her whole bodily life and 2) never passes up a chance to work with so many attractive redhead feminists.

Kiomi Pyke began her acting career at 16 in her hometown of Edmonton where she started taking professional acting classes at Zocalo Film Studio. Throughout high-school and after graduating, Kiomi maintained a lingering passion for the arts and struggled to find a career path that fulfilled her. In 2014, she moved to Vancouver and enrolled in the Acting Essentials program at Vancouver Film School. It was here that Kiomi was able to hone her acting skills and focus on perfecting her craft. She continued studies with VFS and after graduating in 2017, she signed with one of Canada’s most reputable agencies, The Characters Talent Agency. Since graduating, Kiomi has worked on a number of short films including The Belladonnas, Grey, and Us, as well as a local series called Auditions. She also had a hand in both producing and creating The Belladonnas short film. While attending VFS, she found inspiration in Theatre and working with an ensemble cast, performing in front of live audiences. Kiomi is made her debut theatre appearance last November in Young Jean Lee’s play The Shipment, playing several characters including Mama, Grandma and Thomisina. From May 9th to 12th she will be playing Ellen in the play Lepers by Robert Barone.

And the stage manager extraordinaire is Melissa McCowell!
Melissa is a Vancouver-based theatre professional who enjoys tackling stage management, costume and props design.She has had the pleasure of working with a number of incredible companies including Bard on the Beach, Carousel Theatre for Young People, Presentation House Theatre, Ruby Slippers Theatre, The Elbow Theatre,Théâtre la Seizième and Touchstone Theatre. Recent credits include: FourPlay with Studio 58, Not So Dumb with Green Thumb Theatre, and Satellites with Solo Collective. Up next Melissa will be Stage Managing for Wet with ITSAZOO. Melissa is a graduate of Queen's University and Studio 58.

Other guests for VAGINA are:
Fatima Dhowre
Fatima Dhowre is her mother’s favourite stand-up comic…of Vancouver, BC. With her charming smile and wit, Fatima has quickly established her place in the local thriving comedy scene. She’s been featured in Winnipeg Comedy Festival, CBC’s The Debaters, Seattle International Comedy Competition and Sirius XM’s Next Top Comic.

Virago Nation
We are a collective of Indigenous artists creating performance, workshops, and community networks rematriating indigenous sexuality. Founded in May 2016, Virago Nation is on a mission to reclaim Indigenous sexuality from the toxic effects of colonization. Through humour, seduction, pop culture and politics they will show that Indigenous women will not be confined to the colonial virgin-whore dichotomy but will design a new dynamic and multi-faceted sexual identity rooted in their own desires. This is our reconciliation.

And lastly, DJ Nina Mendoza!
Niña Mendoza is a Vancouver, Canada-based DJ that holds the torch for the boogie. An uncanny sense of the groove imbues her DJ sets with a broad swath of styles from forgotten gems to the latest jams from lesser-known artists. With deep knowledge & fierce passion for music, Mendoza’s sets crawl underneath the skin of the mainstream & unearth gold. – C.L.