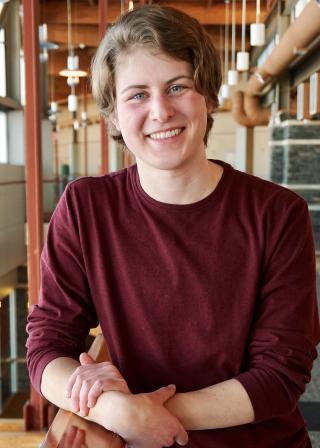 ailing from Calgary, Jordan Fowlie is an up and coming young actor on the Canadian scene. He graduated from Ambrose University with a Diploma in Acting, and since then has appeared in Tiny Bear Jaws Theatre's production of Cleave. Pi Theatre is thrilled to be working on Hir with him, in which he'll portray Max. We asked him what he thinks the joys and challenges of the process will be:

Taking on the role of Max is an exciting adventure because ze has so much personality and such an intense past and being able to explore and play with that is something I'm really looking forward to! That will also be the challenge because there's so much going on below the surface for Max, I don't want to miss anything or portray hir too simply. As a trans man myself, I love being able to take part in sharing but one story in the upcoming representation of transgender and all LGBTQ+ individuals in art. It's truly an honour being the face of Max and sharing hir story with the rest of the Pi Theatre family. I thank my God for Taylor Mac's fearlessness and I hope we can help Judy change this world one show at a time.