There’s no better evidence of the deep creative wellspring to flow from collaboration than Pink Ink Theatre’s new production of Anatomy Lesson. All kinds of clever stagecraft is wrapped around actress Lee Van Paassen in that rarest of theatrical environments, one that takes an already intriguing 90-minute monologue and transforms it into something mythic.

On opening night in the sleek new space at Studio 16, and despite a gaggle of teenage girls who really couldn’t, like, keep quiet, Van Paassen had the rest of us spellbound with her portrayal of a Quebecois doctor whose marriage and health are unravelling. Martha is married to Pierre, a cold-hearted politician, and wit the steely demeanour of Bebe Neuwirth’s TV character Lilith, Martha lays out for both us and her husband the rocky course her life has taken.

Van Paassen first appears from behind a thin screen to briefly address us at a lectern. She’ll return there now and again to sip from a glass of water, but most of Martha’s story unfolds as the elegantly attired woman paces the stage with an increasingly uncontainable rage. The contempt with which she utters the words “pinstriped shirt” offers neat condemnation of both Pierre’s obsessive materialism and her own inability to cut the plush cord tying her to this uppercrust wife-beater, even as her own battle with breast cancer leads Martha to the brink of sanity.

Director (and Pink Ink artistic director) Del Surjik relies heavily on diaphanous screens an the images projected on them in a brilliant series of slides by Tim Matheson. Not only do these flow effortlessly along with Van Paassen’s series of speeches, highlighting her home’s fussy wallpaper or representing the frogs Martha dissected as a child, but the projection of a giant word like “Pierre” in bright white light leads on its disappearance to the scientific phenomenon of briefly having that word burned into the retina in a black to match the soul of this scoundrel.

The script by Larry Tremblay, whose The Dragonfly of Chicoutimi became the tour-de-force swansong of Quebec actor Jean-Louis Millette, builds beautifully in this translation by Sheila Fischman to a climax that has Martha at the end of her tether in a Montreal movie theatre. Cue the use of a flickering light backstage to suggest a film projector, as one more neat trick is incorporated by Surjik and his crew.  Neatest of all, however, is the shifting of those screens so they surround Martha, facing her own mortality in a hospital room. 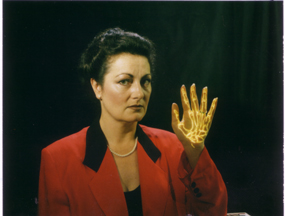 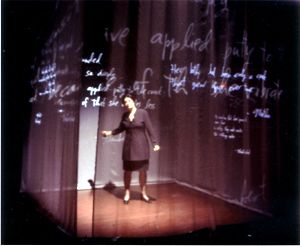 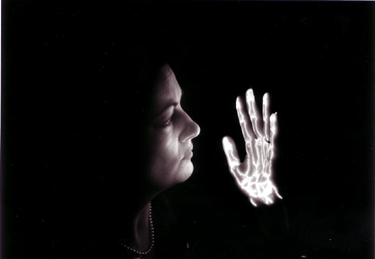 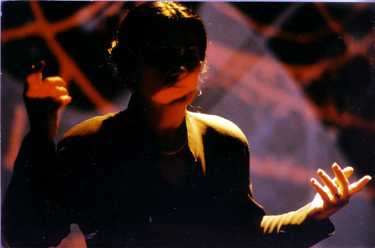 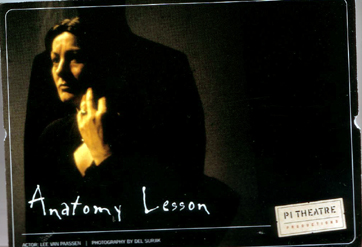