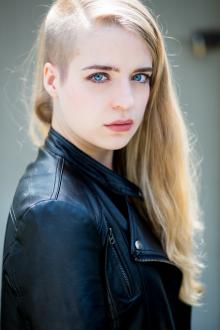 Anais is a queer actor, playwright and theatre producer. She wrote and produced Kill Your Lovers (created with video-designer Shauna Grifiin), which was presented at Buddies In Bad Times Theatre’s Rhubarb Festival in Toronto, and Fresh Fruit Festival in New York City. She is a co-producer for the Virago Play Series, an initiative she began with Alexandra Lainfiesta, Carmela Sison and Kayla Deorksen that develops and produces new work by female and femme playwrights. Virago's first series of staged readings will be presented at the Firehall Arts Centre in 2018. As an actor, Anais has worked with Rumble Theatre’s Tremors Festival, Carousel Theatre for Young People,  the PuSh Festival and the Arts Club. Next up, she will be appearing in the Only Animal's production of SLIME, in Vancouver and at the Banff Centre. She is also creating a new slam poetry musical with actor/musician Sara Vickruck, Poly Queer Love Ballad. Anais is a graduate of the acting program at Studio 58.

Anais is a queer actor, playwright and theatre producer.

There are no blog posts by
Anais West
support Pi Theatre