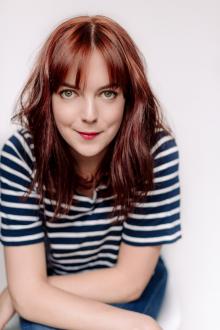 Katey is a Vancouver-based actor and writer. As a playwright, she co-wrote The Surrealists, Karaoke: The Musical (Studio 58), The After Party, The New Years Party (Pull Fest), The Bush Party, The Tie Breaker (Theatre SKAM). Recently, Katey and her partner in crime, Cheyenne Mabberley, wrote and performed in the acclaimed The After After Party which received Pick of the Fringe, The Georiga Straight Critic's Award, and will be featured in The Cultch's 2017/2018 season. Last November, her coming-of-age play, Green Lake, was produced by Solo Collective and nominated for 6 Jessie Richardson Awards including Outstanding Production.

As an actor, Katey has worked for companies such as Green Thumb, Carousel, Caravan Farms, Arts Club, Solo Collective, Yogurt, and ATP, and this year you can see her on ABC's When We Rise as well as Nickelodeon's Escape from Mr. Lemoncello's Library. Katey is a Betty Mitchell nominee, Calgary Critic's Award winner, recipient of the Touchstone Theatre and Jennifer Wade Scholarships, and a graduate of Studio 58.

Katey is a Vancouver-based actor and writer.

There are no blog posts by
Katey Hoffman
support Pi Theatre