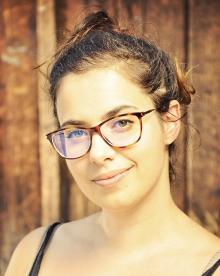 Mishelle is composer and theatre artist with a particular passion for music in theatre. After 5 years as a composer, sound designer, performer, and music director in Vancouver, Mishelle moved to New York where she obtained an MFA in Musical Theatre Composition at NYU’s Tisch School of the Arts. She returned to beautiful British Columbia in June, 2017 full of inspiration and ready to make more music

Mishelle composed and performed in STATIONARY: a recession-era musical, which has seen several productions since its inception, including a run at the Cultch that garnered Jessies for Outstanding Composition and Outstanding Musical. She has designed sound throughout Vancouver, and her original work has been performed from BC to Ontario to New York City. This season she will be working with companies such as Neworld, Rumble, Théatre la Seizième, Ruby Slippers and ITSAZOO. In addition to her win for STATIONARY, Mishelle is a multiple Jessie nominee, and recipient of a Horace W. Goldsmith Fellowship at NYU. She has a BFA in Acting from UBC.

Mishelle is composer and theatre artist with a particular passion for music in theatre.

There are no blog posts by
Mishelle Cuttler
support Pi Theatre